An Initiative of the Citizens of Darjeeling going back to the year 2005. It began with Rev Stephen Lepcha, the Bishop of Darjeeling calling on the professors of Salesian College to share their resources in the field of inter religious studies and inter cultural philosophies for the preservation of harmony that is unique to Darjeeling civil society.
A core team consisting of members from the prominent faith communities of the then undivided district of Darjeeling met at the Tara Hall of Dali Monastery to mark its beginning.
Over the decade and more a series of inter faith meetings have been held in Darjeeling, Kurseong, Sonada, Mirik, Kalimpong, Gangtok, Pakyong and in some places more than once. The target groups in each of these gatherings too varied from school teachers to college professors; from the business community representatives to devotees and believers of each of the participating faith groups. The venue of these gatherings varied from temples, monasteries, churches and mosques to schools and NGO spaces. 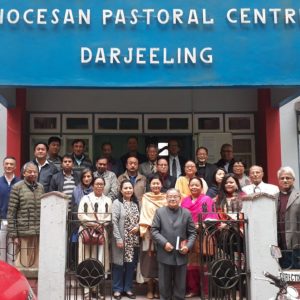 Darjeeling — Salesian College Sonada Principal and Secretary Darjeeling Diocesan Commission for Inter-faith dialogue Dr George Thadathil organised an inter faith forum in Darjeeling, 25 May 2019.
“We want to show the way to harmonious and peaceful living among members of all religious beliefs amid news of rising incidents of intolerance and religious bigotry in the society,” says Dr Thadathil founder of the group which was formed in 2005.
The two hour session had the theme, “Dialogue and Fellowship: Shared Beliefs and Practices Across Communities.”
Some 50 members of various religious affiliations were present for the opening session by visiting professor Dr Georgios T. Halkias, from Centre of Buddhist Studies at the University of Hong Kong. He gave a 20 minute presentation on “A Cross Cultural Exploration of Hellenism and Buddhism in India and Central Asia,” at Divya Vani, a Christian pastoral centre.
“Buddhism was a personal subject for me as well as my research topic, especially Tibetan Buddhism,” said Dr Halkias.
“Alexander the Great brought the meeting of East and West possible,” Dr Halkias reminded the audience, showing how much were Greeks influenced by Buddhism and even converted to and adapted Buddhist beliefs.
He further explained saying, “Greeks who migrated to India have adapted Buddhism as their religion and have given expression to it in the Gandharva art.”
The Tibetan historian Taranatha gives further evidences of the conversion of Indo-Greeks and Greco-Bactrians to Buddhism starting with the reign of Ashoka and which flourished after.
Dr Halkias did not hesitate to say, “Greeks were the first Europeans to embrace an Indian religion – Buddhism. However, they did not convert to Hinduism or Jainism, and so Buddhism was the only religion which accepted others or foreigners.
The edicts of Ashoka written in Greek and Aramaic also testify to the influence of Hellenism and Buddhism.
“Responsibility of inter-faith dialogue is not the responsibility of the members of the dialogue forum alone but also of all people of good will,” said Dr Thadathil opening the floor to sharing and discussion.
“If there is a net work and inter connectedness [among us], it is a sign of inner resources to ward off unwanted trends,” added Dr Thadathil who acknowledged the presence of representatives of Hindu, Muslim, Sai Bhakts, Manav Dharma and Christian religious groups.
New York based Professor Loren Weybright, another visitor at Salesian College Sonada, praised the themes of oneness of humanity, love for each other with dialogue practice. In the U.S. they elected President someone who does not believe in “oneness”, in India too we have seen a similar situation.
Youngest person in the forum Miss Yangchen Lepcha said, “We have come here because we enjoy doing dharma – religion – a living example of unity in diversity. We have to increase the population of young people and take the message to the youth through the forum, that religion and coming together is not boring. Acceptance, and a happy face, is needed to see good, to be good and to do good.”
Director of Radio Salesian and Salesian Television Fr. C.M. Paul and Assistant Professors from Salesian College Miss Choden Yolmo of Education Department and HoD of History Mr Prayash Rai spoke at the the event.
Program director of Salesian Television Mr Bruno Thapa as well as Darjeeling Television crew covered the event.
"Hill People show the way to harmonius living" - Matters India

This FORUM is a venture of the Roman Catholic Diocese of Darjeeling and the major faith communities of Darjeeling.