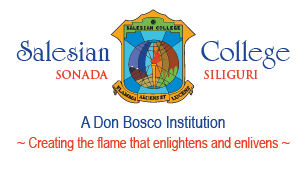 Salesian College (SC) is a Government recognized, minority educational institution of the Catholic Church, run by Salesians of Don Bosco, Kolkata Province where over 2000 students do their Arts/Humanities, Commerce, Science and Professional Courses (UG & PG) under the North Bengal University (NBU).

SC was established in Shillong in 1933, before being shifted to Sonada, in 1938. It comes under section 2 (f) and 12 (B) of UGC Act of 1956. In 1935, SC received affiliation to the Calcutta University for I.A., and in 1948 for BA Course in English, History and Latin followed by Economics in 1950. In 1962 its affiliation was transferred from Calcutta University as one of the founding colleges of NBU. It was in 1970 and 1979 that SC received affiliation for BA Honours Course in English and History respectively followed by the introduction of Education and Philosophy as B.A subjects. In 2006 it received affiliation for Education Honours course. The College opened a Computer Skills Department in 2002, offering the DIT and ADIT courses of C-DAC, Pune, and the Computer Application Certificate Course of NBU in 2004.

On 26th February 2010, Salesian College was conferred the status of a ‘College with Potential for Excellence’ (CPE) by the University Grants Commission and now is in its Second cycle from 1st April 2014. In March 2012, in its Second Cycle, the College was re-accredited by NAAC with ‘A’ grade. The college has retained its ‘A’ Grade in the Third Cycle starting from May 2019, the first College to receive such grade under the University of North Bengal. The college has started MA in English from 2016-17 and MA in Education and Psychology from 2019. From the academic session 2019-2020 Salesian College Siliguri campus has initiated Bachelor of Social Work (BSW) and Bachelor Vocational Studies in Retail and Tourism Management.

Salesian Publications, Salesian Research Centre and Salesian Translation Centre offer opportunities for capacity building for aspiring teaching and research personnel of the region. Salesian College Extension Activities Centre has trained and placed over 600 youth of the region in collaboration with Ministry of Rural Development and Don Bosco Tech, New Delhi. The College also caters to 28 villages of surrounding region as part of its extension activity. Salesian College invites young people and their parents to partner in nurturing an ideal society.

Salesian College Sonada (SCS) is also the first college under University of North Bengal and entire northeast India to operate a Community Radio. Other neighbouring Community Radio stations are run by universities in Kolkata (Jadavpur University) and Guwahati (KK Handique Open University &Gauhati University). The SCS web radio was launched on 28 October 2016 as a Diwali gift to Nepali people all over the world.With due permission for Wireless Operation, the official broadcast of Radio SALESIAN 90.8 FM was held on 8th December 2016.Radio SALESIAN 90.8 FM broadcast can be heard live in parts of Darjeeling and Siliguri as well as Kurseong, Mirik, Salugara, Sonada, Sukna, Pashupati (Nepal), Sukiapukuri, Balsun Valley and several other places.

The educative community of Salesian College endeavours to excel in the preparation of noble citizens and leaders who are intellectually competent, socially sensitive, morally upright and emotionally balanced. We seek to be a Transformational force through advancement of scholarship in diverse disciplines, providing services and championing justice, accountability and collaboration, thereby, becoming flamma ardens et lucens - a flame that enlightens and enlivens.

Educating for a happy life in Don Bosco’s Way is a unique contribution to the science of holistic education. Beginning in 1841, it has proved its versatility across continents, cultures and contexts, regardless of the differences and challenges so typical of grass-root implementation – from formal educational institutes of higher learning to non-formal programmes for children on the streets; from lobbying for child-rights at the United Nations to safeguarding those same privileges in the favellas of San Paulo or the bastis of Mumbai.

Salesians at the United Nations