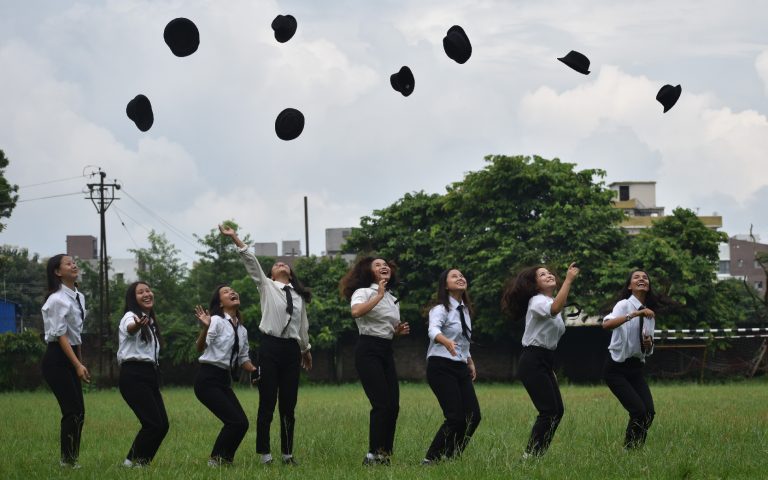 On the 7th of March, 2020 the ninth Graduation Ceremony for the 2017-2020 batch of under-graduate students and 2018-2020 batch of post graduate students was organised in the Kilian Hall, Salesian College, Siliguri. Among the guests attending the ceremony were parents and awardees of gold and silver medals from the previous batches. The chief guest for the occasion was Dr. Dilip Kumar Sarkar(Registrar, North Bengal University).The event began at 10:00 am with a processional march led by the graduating students, followed by the faculty, HoDs, Campus Co-ordinators, Deans, College Management, Principal and finally the Chief Guests, escorted by the NCC cadets. Once all guests were seated the event commenced with the lighting of the lamp by the Chief guest, Fr. (Prof.) George Thadathil(Principal, Salesian College), Fr. Aju Kurian(Vice Principal, Salesian College Siliguri), Dr. Gunjeet Aurora Mehta(Dean for P.G. studies)and Awaneesh Baibhav(President of the Student Council). This was followed by a Welcome address by Vice Principal and the presentation of the annual report by the Principal. Thereafter, there was a roll call by the HoDs of the various departments, followed by the oath-taking administered by the Principal. After the completion of the oath, students were declared as graduates.The Chief Guest was invited to the podium to address the newly graduated students followed by the award ceremony. First, the University Gold and Silver medallists were felicitated and then certificates were awarded to the students securing full attendance and excellence in academic performance in the academic session 2019-2020. The students who have performed well in areas of co-curricular activities, leadership, media management and contributed towards progress of the college consistently for 3 years were awarded with a ‘Gold Certificate’.After the completion of the award ceremony Awaneesh Baibhav, (President, Student Council)was invited to the stage to propose the Vote of Thanks. Followed by which the entire hall stood for the National Anthem and the event ended with a recessional march.